It’s my birthday soon and I’m trying to decide how to fill the week I have off the day job….

So far the ideas include the following: 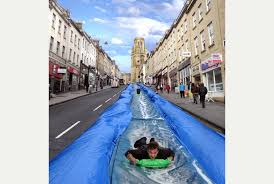 Sunday 4th May (11am – 5pm) promises to be spectacular, with Luke Jerram’s water slide ride planned for Park Street (tickets only and subject to safety checks http://www.bristolslide.com)

The giant 90m water slide is currently being developed for presentation on Park Street in central Bristol. It’s aimed to install it for Make Sundays Special and Bristol Art Weekender on 4th May.

The Ballot for tickets is now over. 96,573 people signed up for their chance to get a ticket! Tickets were issued via email between the 23rd and 29th April. Despite the limited number of slide tickets available on the day, the event will be free for anyone to come along and watch and join in the festivities.

Download your Weekender guide at their website. Inside you’ll find full details on all the exhibitions and temporary shows, including opening times and addresses. If you’re not sure where to start, the guide also features a set of six special Weekender trails. By highlighting connections between works and exhibitions, the suggested routes are a fantastic way to navigate through the city taking in a range of different events and works, and uncovering some of the weekend’s hidden gems. There are over 30 special events running throughout the weekend too and the guide is packed full of ideas for walks, talks, events and workshops for all ages. Some events may need to be booked in advance – Full details, including how to book and times can be found in the events section. For the first time in Bristol art organisations and artists have come together to stage a weekend celebration of art across the city. The Weekender’s FREE programme has been carefully selected to blend internationally significant artists with emerging talent. Highlights include Jeremy Deller at Bristol Museum & Art Gallery, Andy Holden at Spike Island and Richard Woods at Works|Projects. There’s a retrospective of Sarah Records at Arnolfini and outside of the gallery space the Lord Mayor’s Chapel hosts Annika Kahrs’ mesmerising installation of 60 songbirds. Involving over 130 different artists across 16 different sites there’s so much more to see.

Following a sell out run at the 2013 Edinburgh Fringe Festival and a national tour including the Arcola Theatre, London, Tom Wainwright’s wildly successful play returns home to Tobacco Factory Theatres.

Banksy was in LA for the Oscars when he sprayed ‘THIS LOOKS A BIT LIKE AN ELEPHANT’ on an old water tank. The tank was residence for a local legend, Tachowa Covington, who over seven years had furnished it with carpets, a stove – even CCTV.

Starring Gary Beadle (Eastenders’s Paul Trueman as well as acclaimed roles in the Royal Court’s Sucker Punch and Chichester Festival Theatre’s Blue Remembered Hills) – this is a story about creating something from nothing and then having it taken away, in the name of art.

Tom Wainwright’s play, originally commissioned by Tobacco Factory Theatres and a Play, a Pie and a Pint at Òran Mór, is directed by Associate Director of the Traverse Theatre and Co-artistic Director of Theatre Uncut, Emma Callander. It will be followed by a screening of Something From Nothing, documentary maker Hal Samples’ short film about Tachowa, edited from material gathered over 7 years.

It really is quite contrary.

So join us man and woman, goose and gander, Jack and Jill for a night of childhood memories and adult interpretations.
Using live strings, classical percussion and dramatic vocals and storytelling songs, Death & Treason, Rhyme & Reason explores the dark and debauched secrets of our most familiar childhood rhymes. Time: 8pm. Tickets: £12/£8 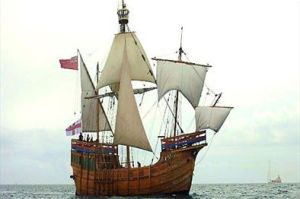 Enjoy a relaxing cruise on the Matthew as she sails around Bristol’s historic harbour. Dine on a fine lunch or supper of fish and chips as you soak up the atmosphere. We can offer a veggie option, chicken or sausage. There is a bar on board for your enjoyment.

Tickets: Standard adult ticket £22, Concessions (under 10s and and over 65s) £15. Book online or via telephone.

This seems quite wacky, The Roof is a spectacular parkour dance theatre show being built in Millennium Square at the end of the festival.
A 360 degree panoramic performance under the night sky.
A door opens and an immaculate ﬁgure steps out onto a roof. Knives are sharpened and the game begins…
Set within the suspended reality of a brutal and unforgiving game, this breathless mix of intimate three dimensional sound and the hair-trigger movement of free running will transport you into the body of a reluctant hero, desperate to stay alive.
Following Electric Hotel (Fuel) and Motor Show, this is the third collaboration between theatre director David Rosenberg (co-founder of Shunt) and choreographer Frauke Requardt.
The Roof is a truly unique experience taking place in a spectacular purpose built auditorium designed by Jon Bausor, set designer for the Paralympic opening ceremony. Sound & music is by Dave Price.
“thrillingly intense…rich and rewarding” The Guardian (Electric Hotel).

Audiences will wear headphones throughout.
Age restriction 12+.  TIME: Doors 9pm for 9.30pm plus matinees on Saturday 24 and Sunday 25 doors 5.30pm for 6pm.  PRICE: £20/£15. Early bird: £10 tickets for Thu 22 May. Book by 31 March. Subject to availability. **Bad Weather**: As the performance space is completely uncovered, and you will be standing throughout, please dress appropriately.

Where old clothes get a new lease of life!